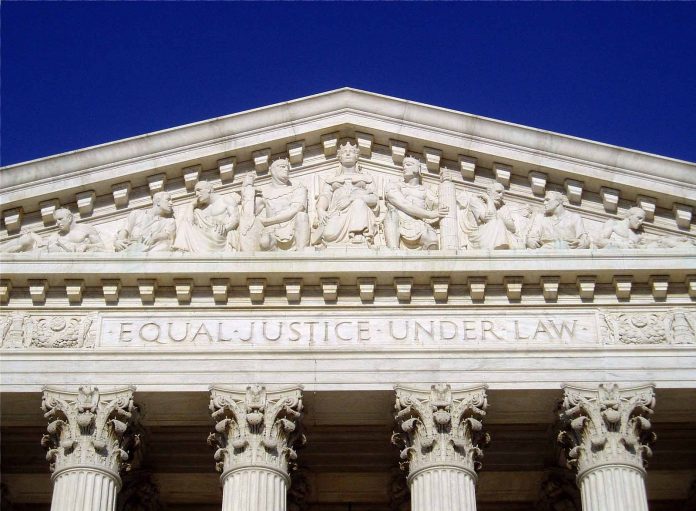 Editors Note: American Action News has launched new mobile and desktop websites to optimize the user experience. We hope you find it as intuitive and aesthetically pleasing as we do. Our commitment remains to provide you with relevant, insightful, and easily accessible content.

We look forward to continuing to serve you.

A divided Supreme Court ruled today that states can prosecute illegal immigrants for identity theft when applying for a job under an assumed identity.

The ruling also applies to all people who do not have work authorization status in the United States. (Fox News)

The Immigration Control and Reform Act (IRCA) makes it a federal crime to lie on the I-9 work authorization form, while limiting how the false information can be used. Federal law also says information “contained in” the I-9 cannot be used for law enforcement other than specified exceptions — but the Supreme Court ruled that if workers use the same information in tax documents, they can face charges.

“Although IRCA expressly regulates the use of I–9’s and documents appended to that form, no provision of IRCA directly addresses the use of other documents, such as federal and state tax-withholding forms, that an employee may complete upon beginning a new job,” Justice Samuel Alito wrote in the court’s opinion, which was joined by fellow conservatives Clarence Thomas, John Roberts, Neil Gorsuch, and Brett Kavanaugh.

The IRCA also prohibits state or local charges or civil cases against “those who employ, or recruit or refer for a fee for employment, unauthorized aliens,” but Alito noted that this “makes no mention of state or local laws that impose criminal or civil sanctions on employees or applicants for employment.”

In the case of Kansas v. Garcia, three immigrants who are in the U.S. illegally used someone else’s Social Security number on their I-9 forms, as well as on tax-withholding forms. They argued that state prosecutors improperly used information from their I-9 forms. The state dropped charges that relied on those forms and agreed not to use them during their trials, while claiming that the law does not prevent them from using their use of false Social Security numbers on tax documents.

The dissenting justices contended that immigration-related employment is already a federal matter and that states should not be able to take immigration enforcement policy into their own hands.

Two people have tested positive for coronavirus after attending meetings inside the Pentagon. “An active-duty airman and an Air Force contractor who both visited the...
Read more
Government

As the number of violent assaults on peaceful pro-life activists seems to be skyrocketing, prayer vigils are also being attacked with a new tactic...
Read more